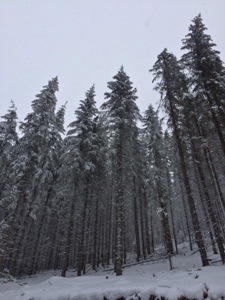 But are these bad news as dramatic as they might seem? At Friday’s closing (Oct. 5th, 2018), the FTSE Italia All-Share index stayed relatively stable at 22,455.

Furthermore, looking at the long term picture, things are somehow different. In 2016 (only 2 years ago), FTSE Italia was at around 19,000, with politics taking its toll again. An 25% increase in an index in 2 years is not bad I would say. What is a true dragger (and a warning for the would-be investors, especially the short term ones), is the volatility in shares: 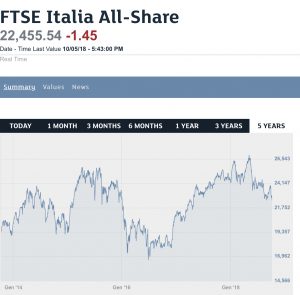 Italy’s shares are more resillient than one would think – FTSE Italy All-shares index over 5 years.

With all these variations, my opinion is that Italy’s companies are not so much worse after 1 year of political turmoil. Sure, the construction sector and the oil and gas giants (ENI, SNAM etc) are suffering now (O&G especially – due to their exposure to more politically volatile countries – Libya, Iran, Blue Stream etc). The banks (Intesa SanPaolo, Unicredit) and the insurers (Generali and Unipol in particular) are quite close to the beginning of 2018 levels. The financial services sector had a big shock after the end of 2015 bail-out (with decreases of 20-40% in a few months) and it still has to pick up. The exports on the other hand are rising fast, showing that the industrial manufacturers have adapted somehow to the new stagflation paradigm and are pushing into new markets. Luxury and long term goods producers (Campari, Ferrari, Fiat, Luxotica etc.) seemed quite able to take advantage of the cheap financing and the changing demands from global customers – their shares have seen hefty gains in the last 2 years.

So where do all these lead us? I would argue that the Italian companies are worth revisiting and (carefully) invested in. The current macro-economics are suffering and pushing down the Italy’s stocks. This is good news for the long term / patient investor, who can afford to wait until mid-2019 to see some pick up in the shares. After all, Italy is not only one of the most beautiful countries, but also home to a few (but resilient) companies who made it on the global stage. So have a look and don’t be afraid to put some funds in its downturn – it might bring some good returns after the dust settles.

1 thought on “Are Italy’s Stocks Worth Investing Now?”