“HBRs 10 Must Reads – On Negotiation” – a HBR Press Book Review 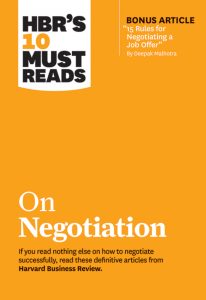 Negotiation should be a skill everybody masters. And this is exactly the problem – everybody’s reasonably  good at it. So how are you better than a skilled crowd? “HBRs 10 Must Reads – On Negotiation” attempts to equip us better to answer these questions. The HBR magazine’s editors combed their huge library and selected 10 of their best articles on negotiation, then updated them and published them in this handbook.

Harvard Business Review Press comes in with not one, but multiple answers. The publishing house started around 2012 a new book series: “HBR’s 10 Must Reads”. Essentially these books are a “beat of” Harvard Business Review articles on a certain topic. Even better than the magazine itself – these articles are curated by some of the best business editors around.

I was always feeling sub-marginal after my major negotiations. Salary negotiations left me with a feeling I could have done more. Job changes involve a constant haggling around, usually accelerated by a binding offer. Projects end up with some parties feeling unhappy – either the customers or the suppliers. And yet all these were discussed, adjusted and agreed – so why would anyone want to revisit them?

Negotiations are tough and complex – and in their heat parties can loose sight of the final objectives. The problems start when you are on that side of the table.

The articles included cover lots of angles on negotiations. A very interesting one was about “15 Rules for Negotiating a Job Offer”. For a simple reason, one is usually not having enough experience on how to do it (unless one changes jobs every year, which is unlikely). So the perspectives of a specialized professor are invaluable in the context – he would have seen more candidates than we would never dream to hear from.

Another interesting set of negotiation techniques came from the article of Deepak Malhatra titled “Control the Negotiation Before It Begins”.  Most of the negotiations focus way too much on the outcomes and too little on the process itself, where  more things become important when it starts. So simple rules can actually focus the negotiations and avoid unnecessary efforts:

– the rule of checking periodically the expectations from the other side.

Not only do these rules avoid consuming unnecessary time in the negotiation process, but they also create depth in the process. The parties understand that they are making progress towards their objectives and that they must work together to achieve them. The parties also establish mutual trust in the process – an ingredient without which no negotiation achieves its full potential.

Another famous article focuses on achieving results via a minimum resistance path. “Getting to Si, Ja, Oui, Ha and Dai” by Erin Meyer look closely at what are exactly the factors that lead to obtaining a final agreement. Those steps are actually simpler than I initially thought. It also seems that reframing often the negotiation terms, together with the other discussion partners, can actually lead to a faster ‘yes’. All in all, Meyer accentuates the constant need to adjust to intercultural and contextual conditions: what is perfectly acceptable in the Chinese culture can become a grave error in the Western Europe discussions.