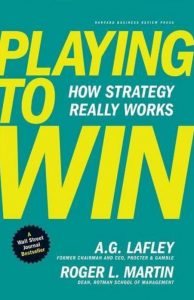 Secondly, the book is written as a Harvard Business Review mega study case. I used to buy the magazine not only for its nice shiny covers, but also for these study cases they publish each month. Well, “Playing to Win” is actually a collection of such study cases related to the rise of P&G to being one of the largest companies in the world in a decade (and also very profitable, which was not before). It actually contains chapters structured around the study cases approach: state the problem, describe the case, the actions taken, then state the learnings of the authors and give the reader something extra – take the case a bit further (but not too much, because it is only a book and not a cookbook ). I enjoyed reading the book also because the sector they are acting is a nice one – too many people discuss nowadays about tech or energy and too few focus on our basic eternal needs companies… and there P&G actually made a difference.
Thirdly, “Playing to Win” comes into a very difficult market moment. Many companies from the financial or the tech sector have spoken so much about the strategy and now keep their mouths closed. Actually banks have reversed engineer the strategy to actually destroy value for some or another of the stakeholders. Well, my impression is that “Playing to Win” does a good job in coming back to basics. Its approach to strategy is intuitive and has appeal to the corporate middle managers who are lost in their long and tiring planning or strat meetings. It should help to repeat some sort of mantra and go for it every day – it apparently worked for P&G.
All in all, “Playing to Win” was the nicest and easiest to follow strategy book I have read in the last year and deserves a place on your bookshelf…

2 thoughts on ““Playing to Win – How Strategy Really Works” by A.G. Lafley and Roger L. Martin – a Book Review”