Simplicient Controlling 2 – To Reduce or Not… Your SG&A Expenses

In June 1999, when Carlos Ghosn was parachuted by Renault to a little known (outside Asia) car manufacturer named Nissan, his reputation should have preceeded him. Maybe the Japanese board of directors underestimated the „Le Cost Killer“ nickname he earned at Renault during the previous 3 years – or maybe they thought that one of the most inner-oriented markets in the world would reform his views. The above simply did not happen. Instead, Ghosn went on to massively reduce Nissan‘s expenses, especially its huge Selling, General and Administration (SG&A) by 20% in only 1 year. He went on for the next decades, making the Renault-Nissan alliance one of the top car sellers on Earth (it climbed to no.1 in H1 2017).

Contrast this SG&A story with General Electric‘s one: between 2013 (SG&A expenses = 21,08 Bln USD) and 2017 (21,48 Bln.), there is barely any reduction in absolute terms. One could argue that maybe GE increased in efficiency – which is hardly the case, since SG&A moved in 4 years from 18% to 17,8%. During that period, GE had a stable board and CEO (Jeff Immelt), a solid corporate culture – and presumably all of the tools to do what is needed when your business portfolio does not grow in sales. Yet, very little was achieved – many analysts stated that the June 2017‘s departure of the CEO Jeff Immelt and his replacement with the company‘s (highly expense efficient) Healthcare boss are a consequence of company‘s profligacy in spending.

There are countless stories about companies being successful or failing with their SG&A expenses. The consequences of taking large scope SG&A actions are irreversible (at least short term to 3 years) and dramatic. These measures impact the company‘s operational footprint (weight), the size and the morale of its workforce, the innovation capabilities, as well as the consumer‘s brand perception. Thus, no wonder that touching SG&A is a sacred cow in most companies and is regarded with fear by most executives.

Yet, under the current hypercompetitive economies, where most sectors are hard to enter or disrupt, where prices are generally falling and operations are becoming leaner by the month (not by the year as decades before), there are hardly any other tools to increase your company‘s profits. So let us start from the basics:

Myself and several (academic) finance purists will argue that there are basically 3 ways to elevate a company’s bottom line (be it Net Profit, PAT/profit after tax or Net Earnings). Proudly summarized by your humble author, here come the 3 P&L upgrade possibilities:

This is it. The over-simplification of a CFO‘s business partnering agenda. Only three ways :).

Immediately after stating them, it is worth noting what a specific group will add. The management consultant’s chorus will point to Michael Porter’s competitive strategies and say that the company’ cannot do everything at once (aka the A, B and C together). Trying to do so would dilute the company’s efficiency and make it be “caught in the middle”. Thus eroding it’s competitive advantage/stronghold.

And here comes the first big rule of reducing SG&A in your company: don‘t try to do it in parallel with too many other initiatives. I hardly believe in flying the plane and fixing it in the same time (https://youtu.be/Y7XW-mewUm8). Forget about this with SG&A – it is not impossible, but if you are about to do serious changes in the expenses mass, it will be counter-productive. All in all, KISS – first reduce, then re-balance.

The second rule of SG&A reductions to keep in mind sounds as follows: one should always use a systematic approach to reducing SG&A – or better, a methodology, such as the one created by this blog’s author (called STOP-RR – proprietary use…). Otherwise, the risk is to simply fall prey to the entropy – facing this daunting, change and counter-intuitive task, managers or stakeholder often give it up before even starting it.

Should you perform any due diligence for SG&A reductions?
Say that you are a person with a goal in mind and still you want to find out how much you could reduce your organizational SG&A. Before going ahead and cutting, you should have several guiding questions in mind: 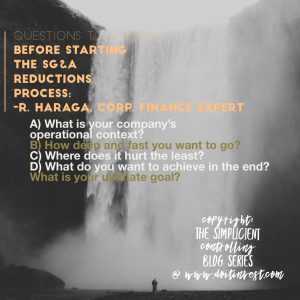 A) What is your company’s operational context? What is its’ framework of reference?

B) How deep and fast you want to go? Call it Radu’s law – my experience shows that the below equation will hold true in most contexts:

C) Where does it hurt the least? What are your company‘s low hanging fruits?
(A smart leader should harvest first the easiest possbile results, based on a rational increasing-difficulty ranking, as well as demonstrate possibilities to the organization)

D) What do you want to achieve in the end? What is your ultimate goal?
(Does the board want to increase the share price? To create reserves useable for new business ventures/innovations? To „get in shape“ an over-weighting SG&A structure? To prepare the company‘s sale? To increase cash-flow/reduce debt? And the list can go on and on…)

To which levels should a company try to reduce SG&A?

This is a difficult to answer question, as it all depends on the company‘s history, context and competing strategy. In an 1987 (sic!) Harvard Business Review article, the financial consultant Thomas S. Dudick noted that manufacturing SG&A can approach even 50% of sales (https://hbr.org/1987/01/why-sga-doesnt-always-work). He also noted that – due to various methods of allocations – simply starting reducing SG&A does not always work (he was endorsing a very popular contemporary method of cost allocation called „Activity Based Costing“ (or ABC), still somehow contested in the corporate finance circles). In the last 4 decades, things have changed a lot. SG&A vary widely among industries, from 8-9% in Energy and Real-Estate (capital intensive industries) to 40%+ in Healthcare and Finance.

However, most of the research you could do will lead you to a set of thumb rules:
1) Look first at your sector‘s average. Current Fortune 500 companies (all sectors) are having their SG&A expenses at approx 25% of sales – but be careful, taylor your measures on the context.
2) Look at the share of your bottom line consumed by SG&A.
3) Fix a realistic reduction target, such as 5-10% of the total volume over 2 years (usually Year 1 is always on the steep side of the learning curve, so you might want to give your company some slack.

Again, these are very general rules who should be tailored and debated appropriately. It might be that your sector is enjoying a boom, in which case reducing your SG&A might actually reduce your capabilities to take advantage of the sector‘s expansion (e.g. you are now in the industrial digitalization sector, where you need to invest to develop new products/capabilities – and need to get in touch with the customers). It might also be that your company‘s situation is dire and the leaders need to act swiftly, thus rendering almost any target good – as long as the company keeps moving in the right direction (e.g. when you are operating these years in certain sub-sectors of the raw materials or the O&G industries).

One should always use a systematic approach to reducing SG&A – or better, a methodology, such as the one created by this blog’s author called STOP-F. Otherwise, the risk is to simply fall prey to the entropy – people often give up on the arduous task of expenses reduction before even starting it.

After adopting a certain approach, the rolling-up-of-the-sleeves work should start. Implementation is usually more difficult than the initial exploration phase and requires a combination of skills that are hard to met within a normal company set-up (in the same person I mean). The SG&A reduction process‘s difficulty can be compounded by internal politics, by the company‘s resistance to new trends or even by simple things as the non-existence of an SG&A efficiency champion. Above all, reducing SG&A is a scary process for most of the managers I met during my professional life – especially for the millennials used nowadays with decades-long constant growth in the modern economies. After all, it is quite easy to point at S&P500 and mention that today (Sept 2018), it has reached above 2,900 (in 1998 it was below 1,000).

And here‘s my last argument why you should start optimizing your SG&A footprint – out of the original S&P (top) 100 companies, less than 20% survived at the peak. The rest are, well, part of the history – no longer generating growth and dividends for their shareholders. This is some food for thought I would assume…

Article originally published on www.doitinvest.com as part of the Simplicient Controlling articles series. Please kindly reffer to the source whenever quoting or extracting paragraphs – thank you!